Posted by poliwood.cinema@gmail.com at 11:38 No comments: 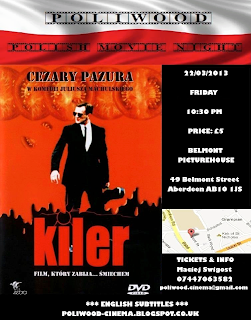 Apparently Polish becomes second language in England, you all must know a Pole you love, a Polish plumber or someone who has a Polish wife (we apparently make excellent wives & girlfriends) but you have never seen a Polish film?!


Wait no more -- the Poliwood has come to Aberdeen!

Poliwood is a private initiative put forward by forward by two Belmont Picturehouse employees Maciej Świgost and Basia Gwara to promote Polish cinema in Aberdeen (and then Scotland, the UK and the world in the long run) ;)


We are delighted to announce the very first the screening of Poliwood: one of the best-ever Polish comedy ‘Kiler’ directed by a renounced director Juliusz Machulski. The film is a story of a clumsy taxi driver named Jurek who is mistaken by both the police and mafia for a ruthless hitman nicknamed ‘Kiler’. Jurek tries to adjust to the new identify. Results? Hilarious.


Where: The Belmont Picturehouse, Aberdeen


Treat yourself a drink before and during the film -- the Belmont Picturehouse in the only cinema in Aberdeen when you can legally consume alcoholic beverages bought in The Bar Below. There is plenty of room to chat with your friend and maybe make a few (Polish?) friends.


The tickets may be purchased on the selected days at the Belmont Picturehouse from Monday 11 March 2013. Or just drop us an email and we can arrange it. Payment via bank transfer available -- you will then just need to collect your tickets anytime before the screening. Easy & convenient!

For more information and details:

Looking forward to seeing you there!
Posted by poliwood.cinema@gmail.com at 10:59 No comments: 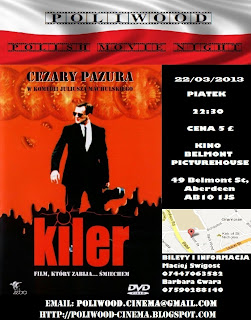